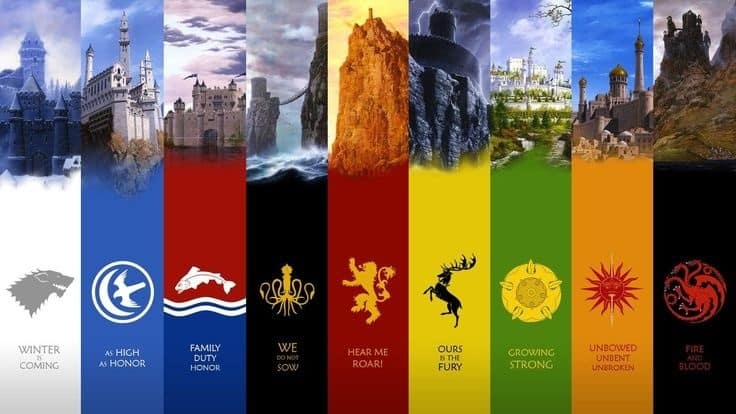 With the Game of Thrones (or GOT as it is often called) becoming a rage all over, we too haven’t been left untouched by the mania. Being the curious cat that I am, I did a little digging around on who are the people that “virtually” rule the seven kingdoms in the real world (aka own the domains of the ruling houses.)

1. House Stark: Interestingly, the most talked about House, HouseStark.com is now owned by someone called James Thomas since 2004, years after the first book was released and way before the first season was aired on the Television.

Stark.com however, is owned by Tim Stark, perhaps a “distant relatives of starks”. Do you recall anyone with that name from the series? Sorry, I don’t!

2. House Arryn:  Spencer Coan, owner of the domain HouseArryn.com, knew what to hit on while registering this domain way back in 2013. Owning it ever since, he is a proud owner of the house who swear their loyalty to House Stark.

3. House Martell: Remember the hot Oberyn whose head was squashed like a ketchup in season 4? Well, this house, known for producing “attractive humans”, is owned by Spencer Coan again!

You would be delighted to know that Spencer Coan registered both the domains on the same day! And well, he also owns “OberynMartell.com” – he seems like a “fan domainer”.

4. House Lannister: Even though being the most “confused house” in Westeros, engaging in activities ranging from incest to public murders, this house is the life of the show. Be it Cersei or Jamie or our favourite Tyrion, everyone has made the show that it is. The owner of the domain name HouseLannister.com seemed to have forgotten to keep it safe and the domain was acquired by Dropcatch.

Well, Huge domains are now the proud owner of the name. Feel like you missed it? You indeed did!

5. House Tully: Again, owned by Huge Domains, HouseTully.com is available on sale if you have fan guts to pay the premium!

6. House Greyjoy– Theon Greyjoy did his best to “degrade” the house by being the swine that he is. However, the house enjoys a great history of being the one with Ships! From Daenerys to Cersei, everyone aspires to have allies with the house to enjoy advantage of Ships. The domain HouseGreyjoy.com is owned by James Seely and was recently reregistered in August 2017. Ouch, that was close!

Huge Domains thought to settle for TheonGreyjoy.com instead.

7. House Tyrell: Remember the dialogue of Lady Tyrell? “Tell Cersei, it was me, I want her to know.” Yes, the house is known to have survived the land of Westeros with its political instincts and “money”. You would be amazed to know that the domain HouseTyrell.com is under reactivation period. Good enough reason to watch Auctions? Well, I have ?

Well, if you are a fan, it might not be easy for you to find “available names for you”, but you do have the scope to get these names for a price!

Interested to know who owns the domain HouseTargaryen.com or DaenerysTargaryen.com? Drop a comment if you know the answer!